50 Cent gets Star on Hollywood Walk of Fame

Queens definitely gets the money as 50 Cent stands tall and proud this morning earning his star on the Hollywood Walk of Fame. The Queens native known for his infamous singles Candy shop, AYO Technology, In Da Club and his hit TV Show on Starz Power is one among many who have been declared legends in the entertainment industry. According to Source Magazine, the star has earned 86 awards with 135 nominations under his belt with a Grammy for Best New Music. 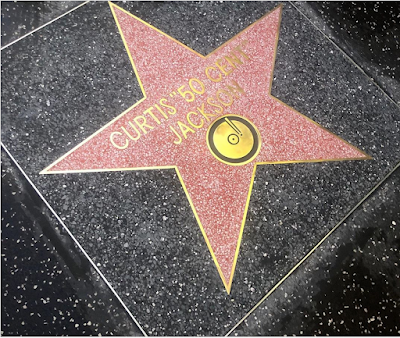 Accompanied by hip-hop mentors Eminem and Dr. Dre 50 walked into the ceremony with his hit single In Da Club and throws sprinkles of his latest show the Power Spin of South Side, taking place in his home town of the South Side of Queens NY Jamaica.  With 10 days to the Power series finale, what shall we expect next? Congratulations 50!


Follow us everywhere @dtfradio
Posted by IvyProductions at 4:47 PM No comments:

The Kobe Effect and Vanessa Bryant Breaking her Silence 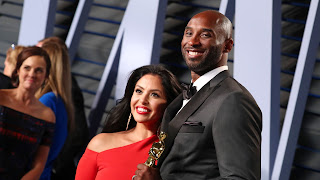 Photo as Per In Touch Weekly

The widow of the late Kobe Bryant took to social media three days after the tragic accident that took away basketball legend Kobe Bryant, his daughter Gianna Bryant, as well as the 7 other casualties in the Calabasas plane crash this past Sunday. The 41-year-old was a former Lakers player and coach for the daughter Gianna basketball team prior to the tragic accident. The accident changed not only the life of Kobe Bryant but the defense coach that was on the flight, team members of Gianna's team, their parents and the pilot.  In the statement Vanessa made she included that the Mamba Sports Foundation will set up the Mamba on Three Fund to help support the families supported by the tragedy.  Her Instagram posts she thanks the world for their outpouring love and condolences for the family. 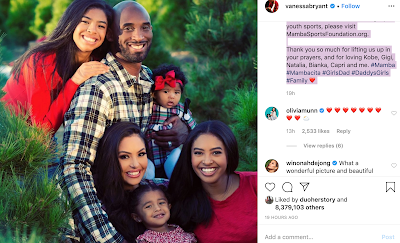 The message includes
My girls and I want to thank the millions of people who’ve shown support and love during this horrific time. Thank you for all the prayers. We definitely need them. We are completely devastated by the sudden loss of my adoring husband, Kobe — the amazing father of our children; and my beautiful, sweet Gianna — a loving, thoughtful, and wonderful daughter, and amazing sister to Natalia, Bianka, and Capri.We are also devastated for the families who lost their loved ones on Sunday, and we share in their grief intimately.There aren’t enough words to describe our pain right now. I take comfort in knowing that Kobe and Gigi both knew that they were so deeply loved. We were so incredibly blessed to have them in our lives. I wish they were here with us forever. They were our beautiful blessings taken from us too soon.I’m not sure what our lives hold beyond today, and it’s impossible to imagine life without them. But we wake up each day, trying to keep pushing because Kobe, and our baby girl, Gigi, are shining on us to light the way. Our love for them is endless — and that’s to say, immeasurable. I just wish I could hug them, kiss them and bless them. Have them here with us, forever.Thank you for sharing your joy, your grief and your support with us. We ask that you grant us the respect and privacy we will need to navigate this new reality.To honor our Team Mamba family, the Mamba Sports Foundation has set up the MambaOnThree Fund to help support the other families affected by this tragedy. To donate, please go to MambaOnThree.org.To further Kobe and Gianna’s legacy in youth sports, please visit MambaSportsFoundation.org.Thank you so much for lifting us up in your prayers, and for loving Kobe, Gigi, Natalia, Bianka, Capri and me. #Mamba #Mambacita #GirlsDad #DaddysGirls #Family ❤️

Since the post, the hashtag #GirlsDad has been trending all over the world with fathers all over the world keeping their daughters closer than ever.  ESPN correspondent Elle Duncan reflected upon her memories with the late Bryant as they spoke about being a father and a parent to daughters. She discusses the half-hour conversation that they had and recalled her thoughts of Gigi, the comfort she received from Bryant's death was he died doing what he loved "Being a girl Dad."  While this tragedy is still haunting the world and being in a state of mourning but the world has become more aware to open their arms and hearts to keep their loved ones close to them. Its a lesson to all of us to hug our mothers our fathers and those that we love; we do not know what life will bring for us but to just cherish every moment. That is the Kobe Effect ....

Follow us everywhere at @dtfradio
Posted by IvyProductions at 3:58 PM No comments:

The 62nd Annual Grammy Awards started on a somber note this past Sunday as the news broke of Kobe Bryant and Gianna Bryant's death on the helicopter crash in Calabasas that took a total of 9 lives. Alicia Keys, Boyz II Men, and Lizzo all took the Grammy stage to dedicate their performance to the basketball retiree and his daughter. The newly victorious Grammy winner took her rendition of Because I Love You to show her deep regret on the passing while Alicia Keys and Boyz II Men dedicated their performance of So Hard to Say Goodbye to Kobe Bryant. 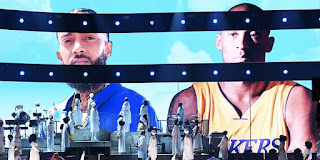 One of the night's most memorable moments was J.Cole winning his first songwriter's award for his feature with 21 Savage. However one question always comes to mind, why is there such discrimination in the voting process for the Grammys according to Variety tyler stated “I’m half and half on it,” he said. “On the one side I am very grateful that what I made can be acknowledged in a world like this… but it sucks that whenever we, and I mean guys that look like me, do anything that’s genre-bending or anything, they always put it in rap or urban category.” he continues “And I don’t like that ‘urban’ word,” he added. “It’s just a politically correct way to say the n-word, to me. So when I hear that, I’m just like, why can’t we just be in pop? So I felt like — half of me feels like the rap nomination was a backhanded compliment.”

What did you think of the Grammys? Does Tyler the Creator have a point?

Leave your comments below

Posted by IvyProductions at 4:29 PM No comments:


There have been two impeachments prior to the impeachment of Donald J. Trump and none have been more newsworthy till Rep. Hakeem Jeffries (D-NY) took the stand. In his opening statement, he answers a question posed by Jay Sekulow Trump's impeachment attorney" What are we doing here?" The Native New Yorker is a representative of Clinton Hill where Notorious BIG was born.

“And we are here, sir, to follow the facts, follow the law, be guided by the Constitution, and present the truth to the American people. That is why we are here, Mr. Sekulow. If you don’t know, now you know,” Concluding his statement with the iconic line from Notorious 1994 smash hit Juicy.

Notorious BIG known as Christopher Wallace was born in Brooklyn New York and known for his gangsta style demeanor and his bars that matched. He was known as the face of the East Coast Gangsta rap, he was shot and killed on March 9, 1997, his murder was never solved.

Posted by IvyProductions at 1:37 PM No comments:

Pharrell and Mariah Carey have been chosen to be inducted into the songwriters hall of fame.
Posted by The Media Katcher at 8:57 PM No comments: